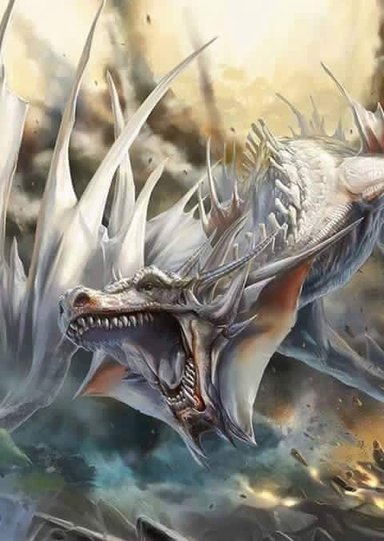 White Dragons are anti-fire-breathing dragons, but because there is a state in which matter stops having heat, they are not as strong as the fire-breathers. While those unfortunate enough to have been on the receiving end of an ice dragon's attack might describe it as a breath weapon, the truth is different. The white dragon selects an area and saps the heat from it, quickly. If the area is very wide, the attack might look like a cone or fan-shaped breath weapon. Unlike fire-breathers, ice dragon attacks are limited only by sight. Because these creatures exist in states of extreme cold, they can fly higher than any other dragon.

In the Dragon Wars, Ynt'taris killed any other ice-breather that dared challenge him. He then set his sights on other dragons, and eventually met Alerius, the fire patriarch. It was the first time Ynt'taris lost to another dragon. Alerius dragged the battle out so allow him time to discuss the impending movement of Time and won Ynt'taris over as an ally. Ynt'taris gave up his Consort to Tiamat, same as the other patriarchs.

If fire-breathers are strong emotion, ice dragons are the embodiment of cooler emotions like contemplation, jealousy, and ire. They can be infinitely patient and do not crave treasure the way other dragons do. Though a willing ally in Tiamat's cause, Ynt'taris participates through his own sense of "this is what I want to do" rather than "we are doing this together." Fiercely independent, Ynt'taris asserts his own agenda and desires whenever possible. Through time, Ynt'taris grew to share Alerius' fascination with mortals, even befriending the Taysoran sage, Alaura. Her death caused Ynt'taris to withdraw into himself even more, only occasionally taking an interest in a mortal for unknowable reasons, such as R'Dar Ora.

Ynt'taris has observed those things catching his attention and practices a form of magic he calls "kinetic shift." This magic allows certain properties to accumulate over time, like momentum, and then be dramatically released all at once. Though able to shapeshift, Ynt'taris prefers his dragon form except when culling predators from the people of Morbatten. When doing this, he takes the form of a 9 year old girl. Ynt'taris aids and rewards mortals assisting him, and executes those he deems a risk to the general population. He once told the Sage Alaura that Tiamat took any hopes he may have had for offspring and so seeks to treasure and preserve the best in Morbatten's children.

​Here is some art by unknown artists that capture the gist of Ynt'taris.
Powered by