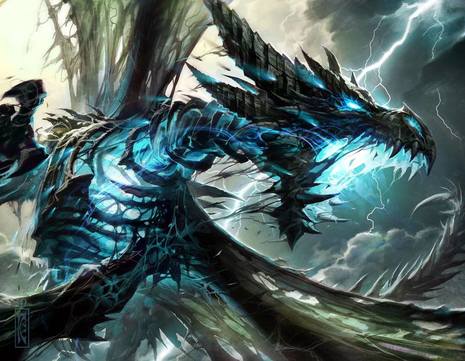 When an unaligned dragon master of magic becomes a lich, you get the Blind Dragon of Merakor.

The blind dragon is credited with driving all sentient races of Merakor into an alliance that therefore resulted in what Merakor became. Merakor was actually 2 empires. Old Merakor was destroyed by the Blind Dragon. The survivors of that time kindled what became new Merakor, or what Merakor is now remembered as.

No one is sure what kind of dragon the Blind Dragon was before becoming a dracolich. Always accompanied by lightning, many speculate he was a blue or maybe even silver dragon. Both metallic and colored dragonkind reject this notion. The archmage Aler Alerest offered the hypothesis that the Blind Dragon was actually an eldar who refused to join the Dragon Wars and was powerful enough in its own right to endure Time, and stay hidden.

The elven triopolis was said to be beautiful... a singular gem of three cities for the three elven races that gleamed in the forests of Shorin. One night, during a brutal thunderstorm, the Blind Dragon attacked from the west. Only those in sactified places, or who were lucky enough to be traveling or sheltering near what would later be known as world trees, endured the attack. Though its breath weapon looks like lightning, the disintegration it caused and the wraiths that took shape from its fell energy continued the battle for decades after the attack.

Even now the elves wonder, "Why? What drew it to us? Surely the human kingships and their advanced magic in Arati, or the gnomes and their science in Xastro, or the dwarves and their vast earthen treasures could have been targets. What made it choose us?"

The attack hit Shorin first, then Kinpeace, then the mighty Havkor last. Like lightning it struck, but like a plague the wraiths lingered. Certain artefacts went missing that night and 1/5th of all the elves perished. The royal family of Pajor has not said which artefacts vanished, but the this is known: the royal diadem of Startide, the staff of Law held by all Pajors, and the library of Havkor in its entirety were never seen again.
Powered by