Geryon, Lord of the 6th, serpents 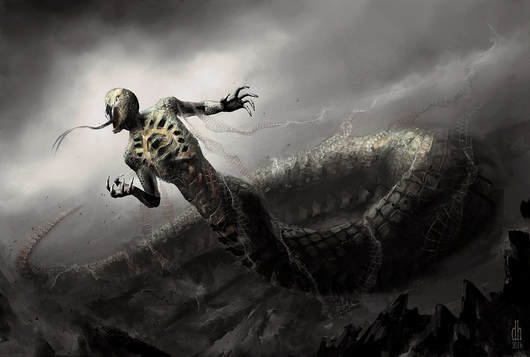 What a great monster by artist Damon Hellanbrand. Geryon is the Lord of the 6th Hell and claims dominion over all serpents. It's a fun title. Serpents lack enough sentience to serve Geryon, though he fancies the title. Sentient serpents do not regard Geryon as their god, like nagas and the yuan-ti. It is said that Geryon made overtures to the yuan-ti but they were well into their worship of the Histakus, their own racial god.

Geryon is unique in the Hells as he aligned with Asmodeus out of the Abyss, as a created eldar formed by Set to be the Lord of Serpents. Asmodeus set Geryon on the 7th Plane to position an ally there against Mephisto. When Mephisto pushed Geryon back to the 6th and claimed both the 8th and 7th, Asmodeus (as a concession) granted Geryon access to the Gate of Warp so that the abyssal eldar could continue to create. Some of the true hellacious spawn of Warp are Geryon's work.

When Baphtomet, Lord of the 5th, reclaimed his fallen throne, Geryon assisted the Lord of Minotaurs and learned about the power Tehran worshippers can bring. Since that time, Geryon has recruited clerics, alchemists, and assassins to him with the promise of new venoms, toxins, and drugs. Though no longer the Lord of Serpents, he is the Lord of Venom. His worshippers follow a strict series of rituals with fatally addictive drugs, through which they can achieve clerical powers and commune with Geryon. It is said there are entire nations enslaved to Geryon by these narcotics.

The irony is that Geryon's religion looks beautiful and glorious, every bit what you would expect of a Temple to a good god. Scriptures, songs, and legends speak of a transcendently beautiful winged serpent that lifts the faithful to Geryon's embrace. Themes centered on love, peace, and serenity predominate. The amount of gold, precious metals, and other things might give a good person pause, but it's not until the actual religion and its hierarchy is understood that the symbolism becomes more baleful. The clerics preach around the themes fulling understanding that they are cultivating souls for a Hell Lord. So do the paladins. Snake handling, snake whispering, and serpent symbolism proliferates.

Propaganda and spin drive the faithful into war or whatever is required. A slave-owning culture is carefully regulated to acquire new worshippers and explode the population. In this religion, peasant farmers s make up most of the society with families having many children. The basic sacraments for peasants include aphrodisiacs, fertility drugs, and mild euphorics.

The priests/alchemists create and distribute their "sacrament" to the faithful on a regular schedule to prevent withdrawal. Only the Temple knows the recipes required to create these drugs. Infused with Warp, followers become sick and can die from withdrawal. As the faithful increase in worship, they are given more potent drugs that open their mind to the Lord of Venom and they gain alchemical powers that look like miracles and divine prayers to outsiders.

The golden serpent rarely fights wars with his followers content to let babies be born to drug-dependent parents and to infuse the chemicals into nations of interest. As the people sicken, the clerics of Geryon come with stories of faith and miraculous healings. In this way, Geryon's cult grows quite powerful; the golden serpent flies over many of the largest and most populous cities in the Western Lands continent though the Golden Serpent has no desire to rule. Political rule is messy and the clerics have learned that their hypocrisy makes it easy for others to tolerate provided they do not become politically greedy. Neighbors hate the Golden Serpent, but its mostly political and cultural, with worshippers being called zombies because of their gentle and happy compliance with orders.

There are rumors that Asmodeus occasionally recruits paladins from Geryon's cult.
Powered by