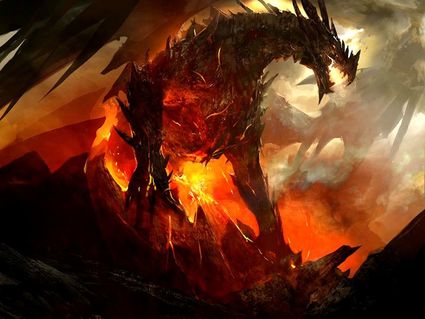 Of all the eldar dragons, only a handful approached the heat burning in the Gate of Creation and Chaos before they split apart. Crimson Burning was the hottest. His real name, Bvocpharan Mae’yl, was lost until Alerius chose to reveal it to the Sage Alaura and Dar Tania.

As noted in the histories, the Dragon Wars were mainly a philosophical disagreement, but there was some fighting. When the All Father made clear his intent to join Heaven and turned to leave, Mae'yl said "no" and attacked. The only dragon to attack the All Father and survive, the attack helped push Tehra into Time's flow. The All Father cursed Mae'yl for his attack and cast him back into Tehra. The curse stripped Mae'yl of his eldar powers, locking his shape, quieting his voice, and removing his eldar magic. His titanic form remained as did his calescent breath weapon. Not to be outdone, the All Father bound Crimson in the heart of Tehra.

When Dar Tania consecrated the Temple At Morbatten in 12 DAR, Crimson was released, but stayed aloof from Tania and Alerius' objectives. Ana though had a fascination with Crimson and spent all of her down time with him in Alerius' mountain. Following the 1st Cascade, Crimson came out of seclusion and joined Ana in her first assault on Bloodstone in 430 DAR. Ana now serves as his rider. He is the guardian of the Temple At Bloodstone. Though he cannot speak, Ana has learned how to read his body language and can effectively communicate on his behalf via their rider bond. She explained once, in a letter to the god emperor, that Crimson went into seclusion because he did not think there were any enemies left to fight amongst the fallen mortal races. The 1st Cascade showed him enemies worth fighting.

Like Alerius, Arminoth, and Armageddon, Mae'yl can shape his breath weapon however he pleases. While sages can speculate, even Alerius acknowledged that Mae'yl could defeat him easily in a fair fight. Alerius' mastery of magic gave him the edge in the Dragon Wars and still does. Thankfully, Alerius and Mae'yl regard each other as peers and equals. To further cement the relationship, Mae'yl was created directly by Takhissis which makes him a bit of a son to Alerius though there is no direct family linkage with Mae'yl being a created being.
Powered by