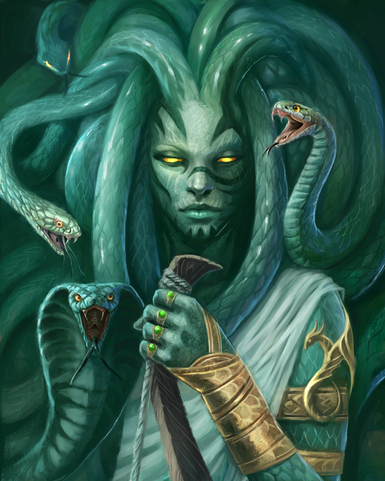 Alerius encountered Syliri long before Time moved. He knew about the medusae as eldar obsessed with affixing and studying the eldar space. They did this through petrification. In the non-Time based "epoch" of the eldar, when Alerius next encountered Syliri, she led a rebellion of her sisters against the maedar. The maedar were a race of eldar created by and aligned with Set. Possessing great power through Set, they enslaved other eldar and pointed them as weapons against the Gates of Creation and Warp, and other Chaos-eldar (like Gorgos, the Darkhold, and the Jade God). The maedar found the medusae ideal front-line fighters, able to petrify by gaze, and - when under Set's sway - with a will that defied their enemies' ability to resist petrification. It gave the maedar all the "time" they needed to persuade the eldar to join Set. Or to sacrifice them to Set outright.

Fascinated by a possible connection to the dragons, as Alerius was beginning to factionalize the dragons into pro and anti-Tiamat factions, Alerius watched Syliri shake off the maedar's influence and lead her sisters in an uprising that wiped out the maedar. While Set may have sequestered some off here or there, Syliri's rebellion wiped away that entire eldar civilization... and Alerius coveted her for the coming Dragon Wars. This was right as Time began to stutter. Perhaps the eradication of the maedar was what made Time move?

Alerius offered Syliri understanding of what was to come... knowledge obtained by Takhissis via the Darkhold. When Time moved, Alerius saved Syliri from falling into Set's Dream when every other non-god powered eldar fell. Syliri watched her sisters lose sentience and fall into madness. She hopes to ascend and bring her sisters to Tiamat. Her promised afterlife is as a dragon goddess with a petrification breath weapon and the worship of the medusae. She has completed her First Rite and gained Tiamat's acceptance. Her Second Rite is what stymies her... Opposition, for Syliri aligned with Tiamat, is to master her abilities granted by Set... an alien dominion already claimed by Set and unwelcome in Tiamat's dominion. Until she can separate herself from Set, she cannot complete her Ascension and free her sisters.
Powered by