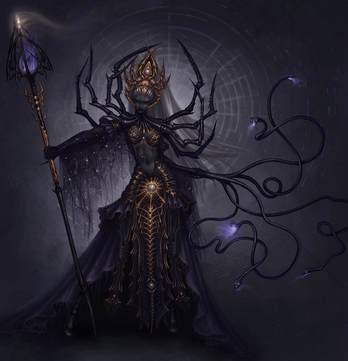 There is a lot of great art out there about Lolth. The dark elves came to worship her following the Race Wars, which split surface from dark elves. Their worship empowered her and drove her more insane. At some point, through the elven priestesses worshipping her, she became aware of Merakor and mated with the first king, Terest Nostram. Their child, Grazz'zt, ascended to the 443rd and heads a paladin order of dridershifters. Lolth entrusted management of the drow to Grazz'zt because, as her worshippers killed themselves off, she became aware that her power decreased.

Since Grazz'zt, Lolth only intervenes directly with her priestesses and leaves the rest to Grazz'zt. The drow thrive in the Underdark because of it. Still twisted, but thriving.

Lolth wishes to raise up the phase spiders, and other spiders while she's at it, to sentience. However, they are all locked in Set's Dream. She knows that if she can free just the powerful Phase Spiders, she would increase in power many times. All spiders? Even more power. Kill Set and take his place? Why not take the entire Abyss? She has plans and the drow serve her heart and soul to achieve it.

Whether they are truly spider legs, spikes, armor, extra arms, tentacles, or something entirely different, all agree that Lolth has the ambush cunning of a spider, phase spiders worship her with their alien sentience, and...

Lolth has only ever appeared twice in the history of the drow:
When she did this, she looked like a sensual female drow, appealing to both male and female, and with a voice of dark passion that haunted those who heard it. Since that time, the holy mothers - drow high priestesses - emulate the records of what it is said she appeared as.
Powered by