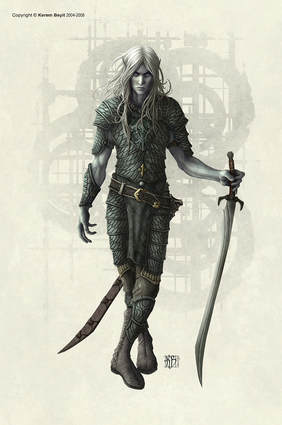 While Daryx, or Malyx Do'Allarus, is a contemporary fixture of Tania, it is hard to imagine the empire without his touch. Before Daryx, Tania did not care about the subtleties of politics, royal intrigue, trade negotiations, or the value of eyes and ears throughout the empire.

It is hard to imagine that a devout servant of Lolth would serve Tiamat. Yet, Tiamat desires a return to Tehra just as much as Lolth desires advancement towards the Gate of Chaos and hegemony over the Abyss.

It is hard to say what motivates Daryx. Here is what is known:
There are many rumors about Daryx, which include:
In Malcor's time, Daryx heads special teams of powerful heroes who seek out to slay, capture if possible, the hellhounds of the Jade God and the wands or sceptres sent by them into the world.
Powered by