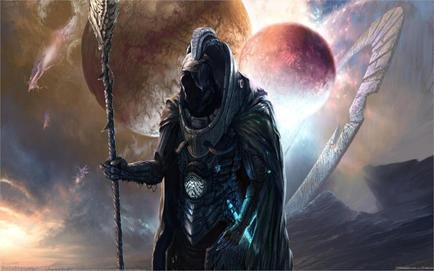 A story is told about a young mage who apprenticed himself to Aler Alerest in the fading of Merakor's bright light. Reluctant to take on an apprentice when rumors of war and drow attacks swirled everywhere, Aler Alerest gave the young mage a challenge: find out the truth of any threats to Arati. Corth accepted and within just days came back with proof of a slaad menace. When Aler asked Corth how he did this so quickly, Corth is said to have produced a flawless crystal sphere and said, "Scrying. It's what I love."

Intrigued with this kind of magic, which Aler Alerest had never paid attention to, he took Corth on as his apprentice. As the situation for Merakor became increasingly dire, Aler retreated to his Tower of Sorcery and taught Corth everything he knew. One day, he said, "The time soon comes when my tower falls and I must leave. If you would come with me, you must decide now, or stay here and fight until you die."

Corth said, "I know your secret and gladly will serve Tiamat."

And so, the Arati Tower fell and Alerius took Corth to Sar Jorek, the fire giant lord of the kerchki. They stayed there for a while until the the drow embassies to secure Sar's allegiance put them all at risk. For there, they retreated to the Temple of Glass, and there Corth began his Ascension rites under the watchful care of the Court of Patriarchs. He vanished from Tehra. Many centuries later, a new god arose in the pantheon of Tiamat - the Lord of Scrying and Wyverns. To secure Corth's allegiance, Tiamat gave to him the racial dominion of the wyverns. Not especially sentient except for the eldar she took with her to the 1st, Corth derives his dominion through Tiamat and the practice of magic by Tehrans involved in scrying.

Corth appears as a tall man with sharp angular features. His eyes glow and swirl with images of those things he is most interested in. Only Corth is able to scry all things, and Tiamat uses this power carefully to further her own plans. Within a dominion, remembering that a god is omniscient, it takes care and precision to scry other dominions without being pulled or falling into that place. Corth has mastered this, but it is still risky even for a god.

Aware of the oppositional principle, Corth has also dedicated himself to understanding how to block and alter scrying. It is said that a mage worshipper of Corth is able to detect, alter, and present false images in scrying. Also, a specialist that is faithful can also interact physically through scrying, such as to pass small objects through the scrying experience.
Powered by