Where does Magic come from? Time 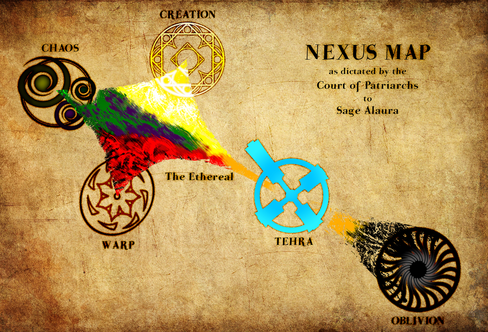 Before Time, it was the Age of the Eldar. Manifest will of newly-born intelligences moved through the space created by Pha Rann, the first of the eldar. Pha Rann created the universe of Tehra. Wishing there to be others, Pha Rann created the eldar without rules or boundaries. Even though there was no Time, yet, there was linear consequence. "The Ethereal" in the map is TIME. It flows from the Nexus Gates through the Tehran Nexus to Oblivion. Let me explain.

Pha Rann encountered the eldar that was to become Demos-Gorgos. Fascinated by a creature of barely thinking creation and mutation, Pha Rann then had his existence divided in two: before and after meeting Demos-Gorgos. Demos met Gorgos and defeated Gorgos (this is why the name order is Demos first). For both of them, there then became three linear events: before encountering Pha Rann, after Pha Rann until their battle, and then after Demos won, as Demos-Gorgos. Try as they might have wished to, by the power of their will alone, they could not undo these things or the order in which they happened.

As the eldar multiplied and began shaping matter in the Age of Dragons, these linear events began to multiply. It wasn't memory. It wasn't hindsight. It wasn't regret. But, it was a chain of "my existence is: before and after each interaction." Some of the eldar became addicted to "winning" these encounters. To their dismay, the losers could not undo or change the reality of having lost. For the victor, they found their will magnified in comparison to the loser. The growing compilation of these linear events had some effects:
When the nexal gates were all close together, feeding simultaneously into each other, Time could not exist. Creation and its results became manifest instantly by the will of the eldar basking in these three very different powers. But, when the Dragon Wars began, the growing separation meant that an eldar could manifest the gate nearest them and it took "longer" for the other energies to become available. This perception, of a delayed manifestation of the other nexuses, was named Time. The eldar could pull, by force of will, these powers to them. The result, they continued as eldar as they always had. The outcome: they age.

The act of pulling the nexus gates (or their power) together is now called Magic. Tehran creatures, even the eldar still in Tehra, age. All the other eldar, as part of the Dragon Wars, left the flow of Time into their respective spheres, also called Dominions. While there is no Time in the nexus gates, the linear principle still remains. Observations of Time for those staying in Tehra meant that the eldar not in Tehra had to come to terms with Time and what it means to them.

Some examples:
Depending on a god's doctrine, their awareness of Time, and many other factors, they will or will not have a unique ethereal experience. For Tiamat, specialists and prodigies in sync with Her are able to access and use the River. They move in and out of it so quickly, they are able to "accelerate" their speed and actions in the real world of Tehra.

Because Tehra is solidly in the flow of Time, it is shunned by the ageless eldar who left. They send avatars or servants to help. When the god feels the need to interact directly, they do so through the Ethereal plane. It allows them to experience their worshiper in the linear moment that matters, without aging. That being said, Tehra is compelling to gods and drawing close to it subjects the god to the pull of Time as well as the pull of emotions. Love, hate, lust, desire, thirst for intelligence, etc... these are powerful drivers. The longer they stay, the more they age. The more they feel, the more they age.

So, why Magic? Wouldn't magic become a god unto itself?
What is Time?
Powered by