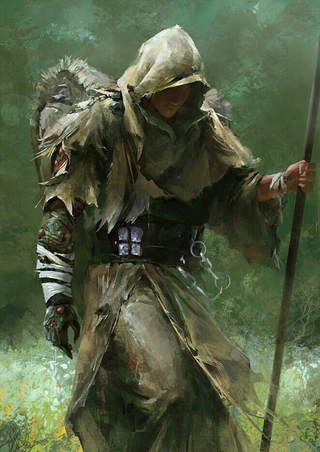 As the Jade God squeezed the dominion of Necromancy tighter and tighter, the opposition principle created a healing one. In the height of Merakor, when the people believed evil to be a sickness of the soul... which could be cured, a man dared to Ascend and claim Healing. His name was Braden.

As Merakor began to fall, stories of an old but vigorous man began to arise. In the stories, the man would travel in the style of a beggar with no material possessions except clothing and shoes. Where he went, fear calmed, wounds healed, and the sicknesses of the mind vanished. These miracles became such a common story that the drow sent out assassins to find and kill the Beggar, as they called him. They eventually did. It was Braden.

They killed Braden. The next day, on the other side of Merakor a new Beggar appeared. Within a week, the assassins slaying Braden died of unrecoverable wounds a priestess should have been able to cure. You see, Braden holds the Healing dominion. Those who slay his avatars are denied healing by any way except natural until they die of old age. Longevity inducing magics are also denied. Quickly, word spread and the Beggar was left alone.

Healing without regard to whether the patients were evil or good, Braden moves through the world ministering to those most in need. His priests, rare though they are, believe that through purity of intent and goodness of soul, even wars can be cured. Though evidence suggests that war cannot, Braden priests are able to heal maladies denied to other gods, such as chaos-touched changes.

Braden stays in Heaven and sends forth avatars to inhabit the hearts of his clerics. When this happens, even if the priest serves another god, they take a vow of silence. So long as a patient is not overtly evil, they will be healed just by believing it can happen through Braden's power. So, for example, a vampire could be healed of vampiricism and die peacefully of old age, or return to normal life age depending. However, a vampire wishing to slay the priest of Braden would be denied it. He would not even be able to approach the priest. The closer such a vampire came the more certain he would become that, should anything happen to the priest, his own restorative powers from feeding on blood might be denied. Forever.

There are copycat priests who use other divine faith to heal in Braden's name. Braden himself does not care about this so long as the healing is not subject to some harmful agenda. However, there is a cult of superstition that has grown around Braden. Charlatans are to be driven out. They are to be fed, clothed, and placed into hospitals (or hospitals brought to them). If the area is dangerous, lords will send militia to escort the priest on their lands. Every courtesy, even if unaccepted, is to be offered. Sub-human races, like kobolds and goblins, have come to recognize Braden. Though they fear Braden, they parade their afflicted out to be healed. There are stories of Braden clerics entering goblin warrens and living there for a time. So long as patients are not hurt, Braden might stay. They typically leave when those healed enter war with good races... so they're never there for long.

Braden priests do not fight. They only heal. Sometimes, realization of a guilty conscience is enough of a threat to end a fight before it happens. Healing can work on the soul in mysterious ways and stories of captors letting Braden go, and the like proliferate. Every culture at this point has a Braden story.  There is another side to Braden best summarized by the Tanian saying, "Health and long life, the blessings of Braden, but at great cost to one's purse." Not because the healing costs money but because, in retrospection caused by the healing, those healed often find themselves donating to causes, taking less profit, and tending to the needs of their family and employees at greater expense.
Powered by