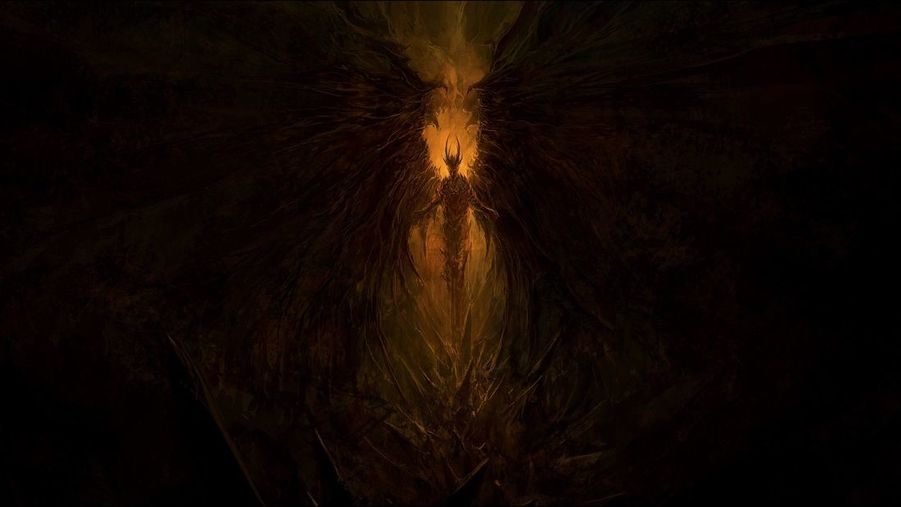 Asmodeus (art by Coda Craven) never met a Phan Rannic or Chaos creation that he did not like to change. Where most of the eldar fell in love with creation and the act of creating, Asmodeus fell in love with changing creation. He could see the motivations and design and just could not help but twist it a little here and there. His role in other religions is most often as a thief or trickster, but the truth is actually worse. Asmodeus covets the Gate of Creation for himself. To ensure that he would have ability to continue creating and twisting, he altered all of Pha Rann's earliest creations so that they when they fell, they became imminently corruptible.

As explained elsewhere, the Gate of Warp is not truly a Nexus, but the belief of the Hell Lords and the Tehran power they receive directly through worship and indirectly as Tehrans cross their dominions (after all, Tehrans enjoy twisting purpose and process and design too) empowers the Warp Gate to allow some creation when either Creation is weak or Warp is very strong.

Asmodeus organized the Hells around the the carnal sins which he saw, even in the eldar days, as exploitable flaws in what would eventually become the mortal races. Where other eldar fled Time, Asmodeus is said to have laughed knowing full well the warp that would ensue as the mortal races chased their passions in defiance of Pha Rann's design. Asmodeus needs no worship and covets it not at all. Tehran lust, gluttony, greed, and so on give Warp all the power they need and have the potential to elevate Warp above the other gates. In the world of Tehra, when "evil" is discussed, it most particularly referring to Warp.

Asmodeus appears as whatever sentient beings view him as through their own lens of fear and insecurity. Best outcome for Asmodeus is that they are twisted in some way and leave with a new or strengthened vice. Worst case is they become enslaved to whatever vices or regrets they already have. Asmodeus prefers to let these things sort themselves out with the Gate of Chaos lending a liberal hand to the ultimate corruption and downfall of those who seek him out. The greatest achievements of Asmodeus besides creating Warp itself include:
The list could go on as Asmodeus cherishes these grand moments. Asmodeus will, occassionally, take a paladin as his messenger to Tehra and the Hell Lords and they become his "fallen angel" for a time.
Powered by