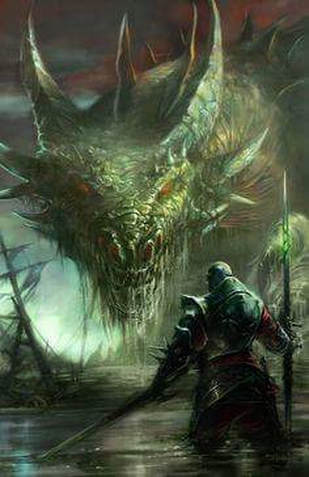 Screem is the black dragon patriarch, even though there are many black dragon patriarchs and they would, for the most part, not know how Screem is. Colored dragons that are also fallen, when encountered by mortals, tend to be either red fire breathers or black acid spitters. I don't know who this artist is, but the dark palette and green-tint would suit Screem well.

The black clans did not want to align with either the All Father or Tiamat and so most fell, hoping that they would retain power in the now mortal realms. Many have. Unlike fallen black dragons, Screem retains magic using ability - though he cannot shapeshift - and has a particularly keen sense of geology. He is the earthen sage where Mallaforax is the natural. In the Forsaken Isles, Screem watches over the dwarves, ensuring they do not accidentally reconnect to the Underdark.

Black dragons use their acid to tunnel, dig, and mine for precious ore and gems. Anything that resists acid, they are interested in. Screem's acid is terrible; it eats through anything except precious metals and gems. The dwarves did not know of Screem until Tania's campaign against Bomoki and the Jade God. They're still trying to figure out what it means for them. Screem is content to be left alone, though his interest and knowledge can be bought. So far, it seems that the dwarves of Stone are content to buy what he knows rather than antagonize him. This suits Screem just fine.

Not an active member of the Court of Patriarchs, Screem will sometimes take an interest in black dragon conversions especially if an ancient fallen is found. He has a list of patriarchs from the eldar times and enjoys gloating at their fallen state, and then consuming them. He amasses a treasure taken from these patriarchs. Slowly, all black dragons are coming to recognize Screem as their leader through intimidation, if not as their patriarch. Because of his more active interest in Tehran affairs, Screem ages in advance of the other patriarchs. He does not mask his dragonterror. He enjoys terrifying those who seek him out.
Powered by