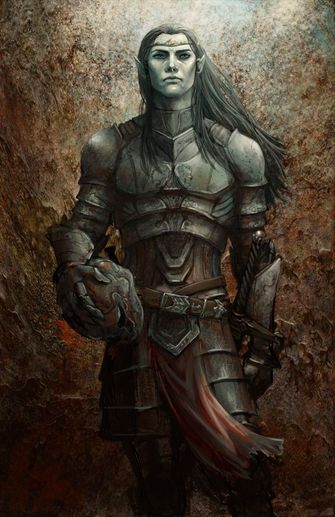 Born approximately -4,000 DAR, the grey elf Vel Pajor enjoyed a rich life of magic studies in the Merakoran Triopolis of the Elven Nation. His father, Jenc Pajor, ruled as he always had since the eldar days. Being born at the height of Merakor's glory, Vel experienced a very different world for almost 800 years before the Kinslayer Wars came.

Cannily, the drow avoided their surface cousins and crippled infrastructure and communication throughout the empire long before they ever attacked openly. For the elves, they had but one warning. The high elves of Kinpeace suspected something amiss when, through their own initiative, they began shadowing messages from Kinpeace to the other races. By -3,200 DAR, they were convinced an attack was coming and fortified Kinpeace in a military installation. The other elves saw this and scoffed. Vel's father, Jenc, removed Kinpeace from the Triopolis as a punishment for what he considered overly-aggressive tendencies in the hotter-blooded high elves.

The grey elves already considered the high elves too warlike when this happened. Not knowing how truly infiltrated they already were, the drow were able to play on this and present the militarization of the high elves as a reason for the war that came to the Triopolis in -3085 DAR. Increasingly paranoid and isolated, the other races fell without the elves even understanding it. After all, the heroes of the realm remained active in battling evil. The high elves saw this and in vain, tried to warn Jenc. In a frantic last bid to save the elves, the high elves allied the sylvan nation and marched on Shorin to depose Jenc. The grey elves assembled their armies and all prayed that an elven civil war would be avoided by diplomacy.

Instead, the slaad infiltrators as well as elves already aligned with the drow and waiting in Shorin, attacked. Vel saw his father fall to high elves. He watched as paladins loyal to his family were either shredded to ribbons or turned on them. A powerful mage in his own right, Vel managed to assemble what remained of his family and flee Shorin. The details of the truth slowly came out as Vel joined other refugees, heroes, and the archmagi. Vel made the decision to abandon Merakor and joined his might to the archmagi for the journey to the Forsaken Isles. The trip came at great personal expense to the mages.

What began as rage at the high elves turned to dismay turned into a deeply rooted distrust of other elves. Once in the Isles, Vel bound all grey elves into a rigid caste system and put the high and sylvan races on the periphery of Morilon. Seeing paladins rise up against him, in the service of the drow, Vel never recovered his faith in Krentismar and Pha Rann. He worships at the altar of magic now, seeking salvation on his own terms through his own power. The high and sylvan elves, abide by Vel's ordering of society, but only when in Morilon proper.

Vel is lost in the vast space of memory and resents everything in Morilon that is not of Merakor.
Powered by